NASA has done it again: has found the third-largest water reservoir on Mars Mars, our neighbouring planet, is a wonder!

Ever since we have known about the Solar System, it got us thinking about whether life on other planets can exist. The astronomers and scientists around the world have put in much effort to get answers to this question. The idea of whether there could be others living alongside us humans has intrigued humankind since a really long time. Scientists have tried to find water on these planets to prove the possibility of life and have been successful in the recent past! 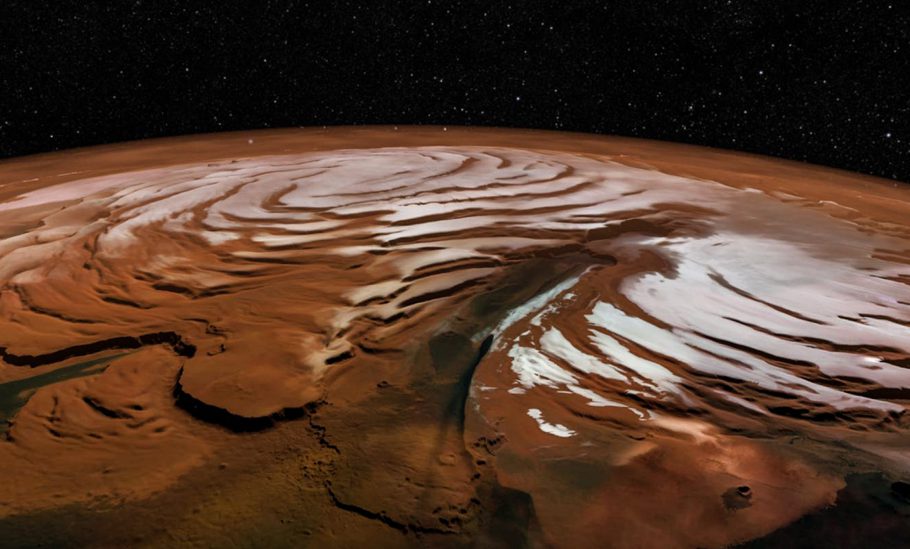 Scientists recently have discovered a huge reservoir of water frozen below the northern polar ice cap on the surface of Mars. Using ground-penetrating radar, scientists have made this discovery and announced it earlier this week. Resting around a couple of kilometres beneath the Martian North Pole, Mars’ northern cavi unit was discovered with multiple layers of ice mixed in the sand. This ice amalgamation is believed to be formed over a course of hundreds of supereons. This third largest water reservoir on Mars was discovered by NASA’s instrument SHARAD or Shallow Radar, which is mounted on the Mars Reconnaissance Orbiter.

The observations have uncovered that there are alternate layers of slabs of ice horizontally alongside the sand, which sandwiches them. 61 to 88 per cent of this is composed of ice, which is enough to submerge the planet if it is melted and brought to the surface. The frequency and the volume of these ice slabs keep increasing as you move towards the North Pole, making them thicker and larger.

According to the data of SHARAD, this cavi unit is proof of the Martian climate and its historical records. Mars is believed to have ice ages like that of Earth, which resulted in this huge chunk of ice. Before this discovery, scientists had lost all hope about the existence of ice caps on Mars. However, SHARAD’s data proved significant in providing a piece of clear evidence over the existence of climatic cycles on Mars in the past.

Mars from the space

The buried ice cap structures were protected by the sun all these years, helping them stay intact. These ice caps arose from beneath bearing layers that resemble a tree, signifying the existence of evolution. The sand kept the Red Planet’s ice from melting due to atmospheric changes. This data not only proved to be informative but also paved the way for the understanding of the existence of many more things on the Red Planet.

Looks like the MARS expedition is going to turn out to be more informative in the coming years!

What do you think of these developments? Do you think there is a slight chance of life existing on Mars?

Let us know in the comments below!

Five Travel Facts That Will Bolster The Travel Bug in You

Transgender dropped down from the list of 'disorders' in WHO manual